(Disclaimer: It turns out Burrata goes off really REALLY quickly. If you include all the times you buy the cheese and let it go off before getting round to tasting it, then the price can rocket!)

Texture: Although we expected a creamy cheese, the first thing that hit us both was the intense clotted cream-like texture. So much so, that an excerpt from Ellen’s notes reads ‘it’s almost like eating cream’ whilst Izzy wrote ‘liquidy, oozy and creamy’. After much meticulous research, it was brought to our attention that Burrata is actually, by definition, mozzarella with cream in it. So, err … spot on girls!

Just like mozzarella, Burrata is kept fresh by immersion in water and needs to be drained before serving. When you cut into it it’s squishy, oozy and mushy but in the most delightful way (no need for a spoonful of sugar). Talking of spoons, we ate ours with a fork.

Taste: Eaten without our delicious accompaniments, this cheese is slightly on the bitter side which makes for a lovely balance with the creamy texture. Although it’s not more-ish as such, there doesn’t seem to be many adverse side effects like boils, rashes or heavy sneezing that might inhibit its consumption, therefore we had no trouble polishing off the whole piece (see photo). 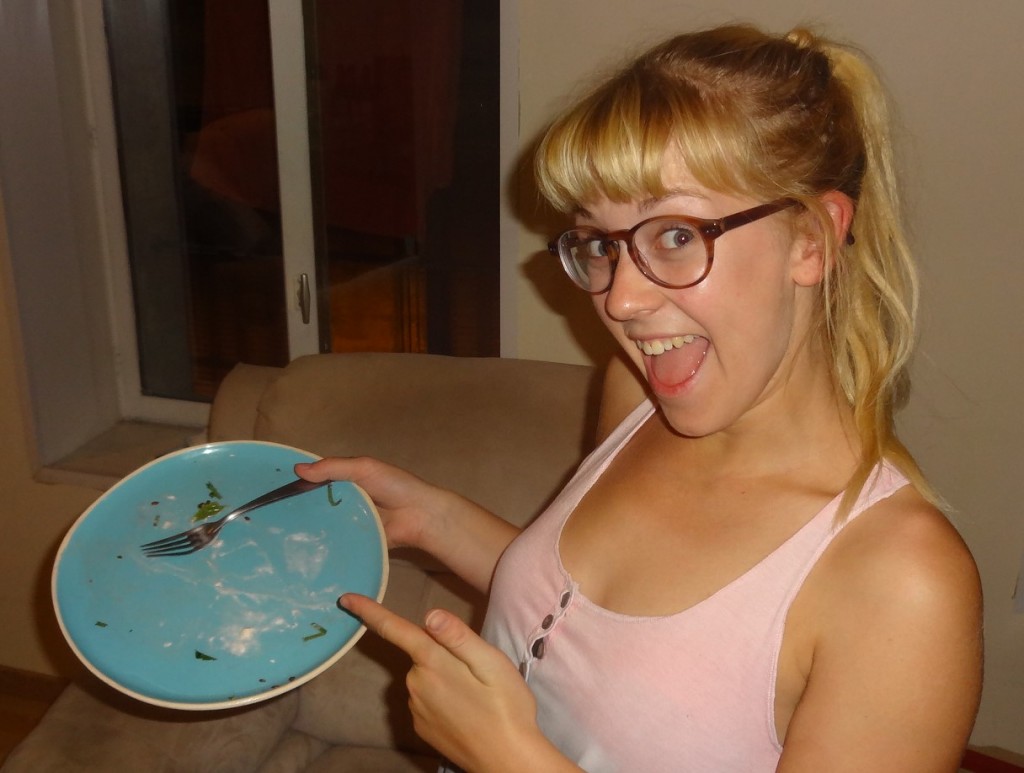 Eaten alone it wouldn’t be one we’d choose to snack on, but the flavour works fantastically in combination with the contrasting taste of sweet fruits. Burrata is the guy at a party that not everybody knows, but he’s an interesting character for those who’ll listen. He gets on well with quite a lot of people. Especially if they’re fruity (see serving suggestion)!

Strength: We reckon it could only bench 80kg, although it would beat mozzarella in an arm wrestle. The flavour does come through but it’s nowhere near as cheesy as our feet after work.

Burrata as a starter: Although a variety of fruits would work, a great suggestion is to surround the Burrrata with crisp watermelon, fresh mint and blueberries. Easy peasy lemon squeezy. But no lemons! Aesthetically it looks best served whole allowing for the ‘ooh’ moment of the cream oozing from the inside when it’s cut open, so we suggest this as a starter for two or more.

Overall score: Izzy 7– Ellen – 7 so we can add the scores up and divide them to get an overall score of 7! Ellen gives the recipe a 9. So does Izzy. So that makes that a 9 then.

Final thoughts: With a flavour slightly reminiscent of a posh philadelphia, this light and creamy cheese was really yummy and we’ve definitely got our eye on some more interesting flavour combos. It’s got a lot of potential. The only thing missing is an Italian stallion feeding it to us as we lounge in the sun by the vineyards of Tuscany. Maybe next year.

With many thanks to Henry Ford for information accuracy assurance.

Edit: On reflection, we would like to amend our previous scores and give burrata an 8.