We paid: Nothing, it was a birthday present. Someone else paid €2.20 per 100g – only around £1.58 with the excellent (as long as you’re British) exchange rate at the moment.

Brief description: A medium-hard cheese with an oily rind, both creamy and grainy texture and a strong classic flavour.

WHAT THE DEVIL IS IT?: NOBODY SEEMS TO KNOW. It’s an oily cheese, claiming to be ‘FARMHOUSE MULDER PIQUANT’. After a few rounds of ‘This isn’t spicy though’, ‘why does it say piquant if there’s no chilli?’ we finally figured out that piquant does not mean spicy, but pungent or tart. The name ‘farmhouse’ apparently doesn’t refer to the type of cheese but the method. It’s used exclusively for cheeses made in a traditional way on local farms in the Netherlands whose label is EU protected, which is just one of many important decisions that we will no longer be a part of if the UK leaves Europe in 2017. If you consider this as much of a travesty as we do, you can write to your local MP here… 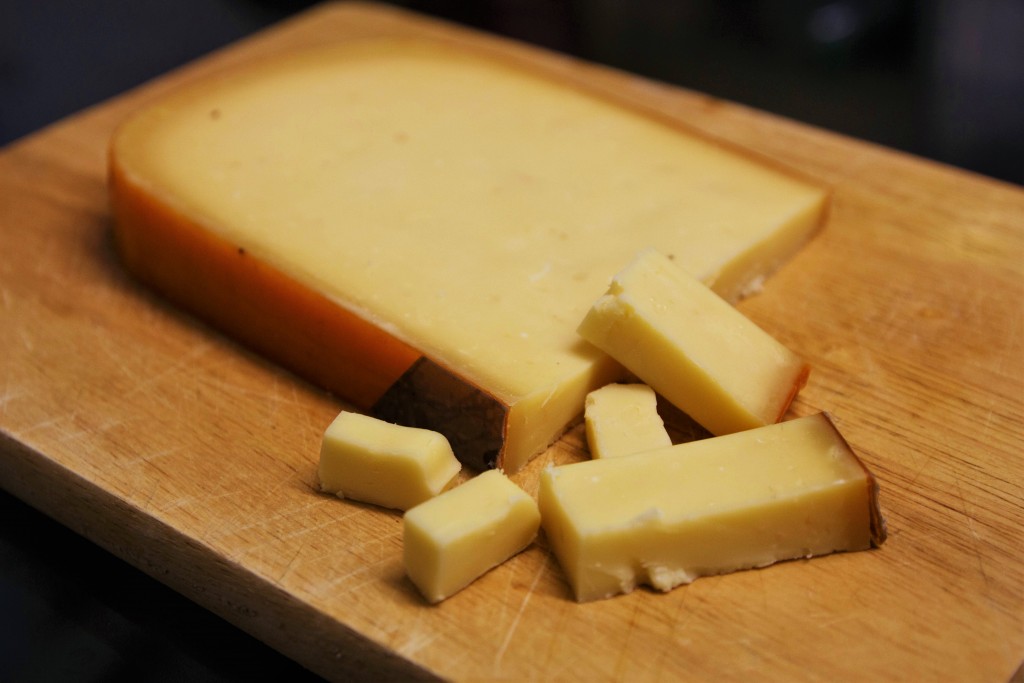 Strength: Sumptuously aromatic. This one packs a punch (and Judy) but it won’t hit you over the head with a string of sausages. Or make your breath smell. If cheeses were allowed on Graham Norton’s sofa, it would be able to hold its own even if it was sandwiched between Judi Dench, Adele and a big George Clooney-shaped pot of chutney.

Texture: It’s melty and velvety and I want to put it in my mouthety. Izzy’s poking it to prove its bouce-backability which is characteristic of younger cheeses. Despite its smooth moves, there is a little je sais quoi (je sais now because we spent ages trying to figure out what it was). We can’t work out whether it’s intentional or not, but there are small grainy morsels throughout the cheese (see below).

Whilst we are unsure as to the actual nature of this bitty element, between us we are 72% sure that it’s a by-product of the farmy, naturey, home-goodnessy, windmill cloggy cheese making process and we’re not opposed to it. It gives it an authentic edge that would fit right in in the Leeds student scene. Our theory is that it’s somehow caused by under-mixing at some stage in the process, but if anyone can be our Jesus and shed some light then please let us know!

Young and fresh like a new born baby. It’s a flavour that you’ve probably tasted before but we really like it. As classic as Bach, but its improving our Thursday. If you slice it really thinly it’s so goud-a as more earthy and nutty flavours seem to envelop the tongue.

Final thoughts: It wasn’t what Izzy was expecting but she really enjoyed it. Dair-i say it, it would be in my top ten which is a very prestcheesegious position. As for Ellen, she would put it in the classically nice but not spectaculose category.